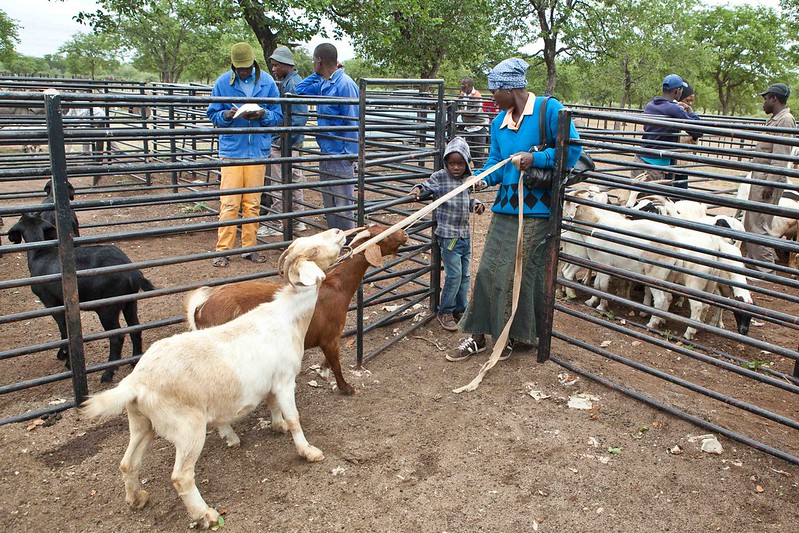 It is after sunset in Chimanimani, a district in Zimbabwe’s eastern highlands, and Olinda Tuso is steering her buck Boer goat towards a corrugated iron structure that looks like a carport. The daily ritual puts him out of harm’s way. Hungry jackals come down from the nearby mountains looking for food at night. “If you don’t secure your livestock, they may be eaten,” Tuso says.

Tuso bought Drogba, as she calls her goat, a year ago from a livestock market in Mutare, a city 150 kilometres away by road. Since then, she says, he has become her “livelihood, source of wealth, and income”. The Boer breed, which originated in South Africa in the early 1900s, produces more meat than local breeds, placing Drogba’s stud services in high demand in the surrounding area.

With 2,000 households in Chimanimani, it’s a booming business—Tuso charges US$10 per covering. He got his name from his virility. “Fellow community members named him after he fertilised 10 female goats, which produced two kids each,” she says with a grin.

Tuso is not alone in seeing the benefits of goat-rearing. Many Zimbabwean small-scale farmers who traditionally kept cows have switched to goats as a result of the country’s devastating droughts. The droughts have killed thousands of cattle. But goats are coping, says Lindani Ncube, a goat breeder in Bulawayo who breeds Boers as well as Kalahari Reds, another high-yielding breed.

Sabina Homann-Kee Tui, a senior social scientist with the International Crops Research Institute for the Semi-Arid Tropics based at Matobo Research Station in Zimbabwe, says goats offer many advantages for drought-prone regions. “Goats do not require much up-front investment in housing or equipment and they are hardy, much more likely to survive a long dry period than, say, grains,” she said. Moreover, goats are not fussy about what they eat. “They even eat failed crops,” she says.

Ncube says many of his customers are women. Goats offer them countless benefits, he says. “The goat breeds I keep yield more because of their good meat qualities. Within a short period of time, the goats grow very fast but consume very little, which is an advantage during drought.”

Also, Ncube adds, a male Boer goat can pass these qualities to indigenous breeds. On this, he is backed up by Andre van Rooyen, an expert in Boer and Kalahari Red goat farming based at the Matobo station. “Cross-breeding will produce offspring that may have a better feed-to-market conversion rate if fed properly. Such animals are also preferred by consumers,” he says.

Backed by such insights, and by research indicating that southern Africa could become drier as a result of climate change, there are projects to further promote goat farming in Zimbabwe. In 2019 the European Union launched its Value Chain Alliance for Livestock Upgrading and Empowerment. The €7.3 million project will run for four years, and aims to register 10,000 goat farmers nationally. It will also help farmers overcome challenges like a lack of veterinary medicines and poor regulation of commercial goat production in Zimbabwe.

Van Rooyen acknowledged that breeding programmes involving indigenous goat breeds could lead to the local breeds being lost over time. But he didn’t think the responsibility for their conservation should rest with farmers like Tuso, who see goat rearing as a lifeline. “Most definitely not at the expense of improved income and ridding themselves of poverty,” he said.