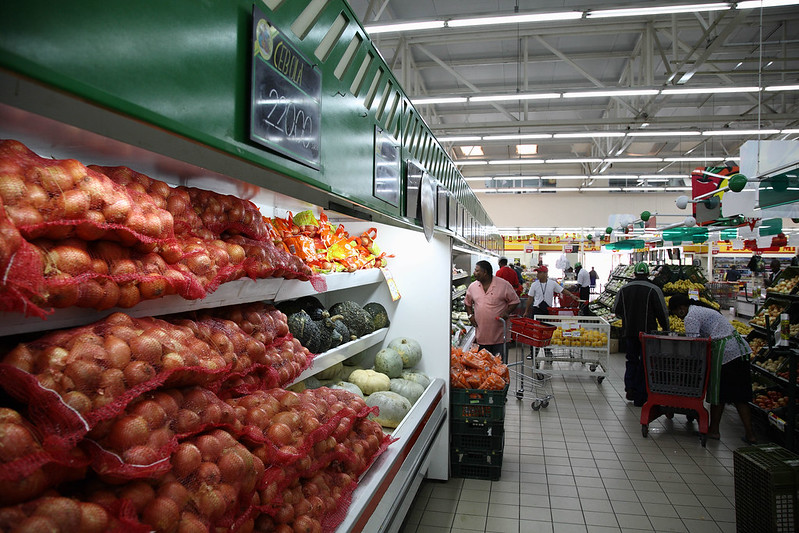 Gari—made of dried cassava flakes—is a common food staple in Ghana. Mixed with water, salt, sugar or condensed milk, it can be eaten with soups, or on its own. But go into a big Ghanaian supermarket, and you’re unlikely to find gari on the shelves.

That is a big problem for Sandra Ameworla, who runs Gari Boutique, a gari processing and packaging hub in Ghana’s Volta region. To sell to supermarkets, Ameworla has been trying to get her product registered with the Ghana Standards Agency for a year and a half. But so far, the effort has gotten her nowhere.

“I don’t know when I will be given the clearance to push the products into the malls,” she says. “This is what is killing the local processing sector in Ghana.”

Gari processing is important for Ghana’s rural economy. The country produces about 740,000 tonnes of the foodstuff annually to meet local and international demand. Gari processing employs 40 per cent of rural people in the country, mostly women, and is estimated to have earned the country US$1.7 million between 2001 and 2007.

However, like many Africans, Ghanaians are increasingly buying their food from supermarkets, and a report published last year by emerging-markets consultancy Konfidants found that only 18% of the goods sold in Ghanaian supermarkets were locally-produced. When asked if their shops sell gari for this article, all the big malls said no. This means consumers in cities and urban areas, where the popularity of gari is growing, have to buy from roadsides and traditional markets—or forgo the local dish.

Gari is not the only Ghanaian staple that struggles to make it into supermarkets. The same goes for vegetables and other fresh produce says John Kpodovia, deputy director in charge of crop services at the country’s Ministry of Food and Agriculture. “We have tomatoes in this country, but they are not on the shelves,” he says. Instead, the shops are stocked with imported products.

It’s a problem in other parts of Africa, too. A Kenyan study published in Scientific African in November last year found similar issues. The study’s authors from the University of Nairobi and Copenhagen Business School in Denmark surveyed 48 food processing firms, most of them in the snacks, dairy or grain milling industries. The barriers which kept these firms out of the ‘modern’ supermarket chains in Kenya included legal requirements and licenses, and a lack of investment.

The Kenyan food processors told the researchers that supermarkets might take 60 to 80 days to pay their suppliers. Some of them also complained that packaging standards were unreasonable. One nut producer said that a supermarket had asked that he guarantee the precise number of nuts in a packet, even though the nuts were sold by weight. As a result of these challenges, the paper says, some Kenyan processors were struggling for survival, while others were focusing on small shops and convenience stores.

Kpodovia admits that Ghana’s number one barrier for local food producers is the cumbersome standardisation and regulatory procedures. Even though his ministry has trained farmers and processors to overcome the challenge, he says a lot remains to be done. “We are intensifying our engagement with the various stakeholders this year to have a relook at the situation,” he says.

Rebecca Owusu, an agricultural economist based at the University of Cape Coast in Ghana, said that one way that processors could overcome their challenges is to sell their produce online. However, she stresses that the registration process is there for a reason: to keep Ghanaian consumers safe. The testing, which includes microbiology and metallic analysis of the food products, guarantees that foodstuffs are safe to consume. “If they are compromised in any way, the public will be in danger,” she says.