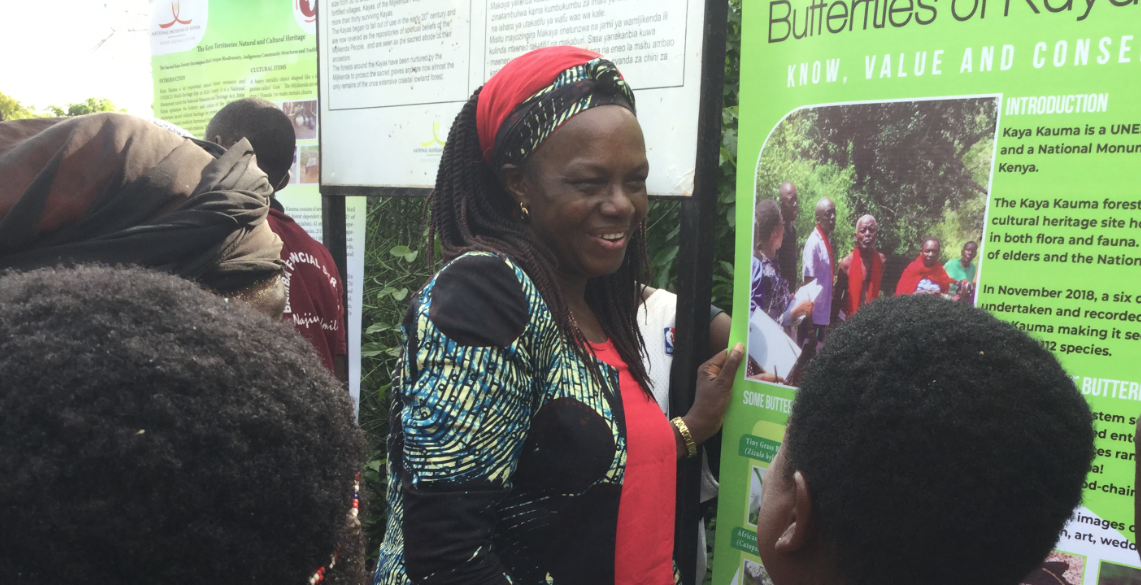 Esther Kioko has gone from village girl to top insect scientist. Here she tells Geoffrey Kamadi about her journey so far.

Like many of the children in the village where she grew up, Esther Kioko’s favourite pastime was chasing grasshoppers, praying mantises, and other bugs. The children would disembowel the hapless critters using acacia thorns, “just to have the pleasure of counting the eggs inside them”, she says.

Since then, Kioko has turned her passion for insects into a career and is now the head of the zoology department of the National Museums of Kenya, home to more than 3.2 million invertebrate specimens. She leads a project to assess the diversity of pollinating moths and butterflies in East Africa and another on vegetable insect pollinators in Kenya’s drylands. In August this year, she was awarded the Marsh Award for Ecologists in Africa, a £2,000 travel grant given out annually by the British Ecological Society to allow African scientists to travel to the United Kingdom and connect with scientists there.

Life was simple and joyful for Kioko growing up in Ithaeni village in Machakos District, a few dozen kilometres east of Nairobi. This sun-scorched, rain-starved spot, where little grows except for the hardy acacia, lies in a famine-prone region of the country. “Yet life was happy, regardless of the hardship,” Kioko says, a nostalgic smile playing on her face. “It was nothing out of the ordinary for us. This was the only life we knew.”

The support Kioko received from her parents went a long way towards shielding her and her siblings against the harsh realities of hunger and want. Her father was a mechanic in Nairobi. Her mother looked after the homestead and tended the village’s modest coffee farm. After sundown, Kioko and her siblings would huddle around the paraffin lamp to do their homework. “Our eyes would smart, of course, because of the smoke,” she says. Her mother kept the light burning, making countless treks to the market and back to buy paraffin in a 300ml Fanta bottle.

Kioko attended primary school in her village. Later, she enrolled at Kenya High School in Nairobi—a former European girls’ school. Her family took out a cash loan from the coffee farmers’ cooperative to pay her school fees. A new world opened. She tasted, for the first time, custard and egg curry as well as bread and butter pudding—types of food that were very different from the traditional muthokoi staple in her village, a mixture of boiled beans and maize. But as much as she appreciated the new environment and the goodies it offered, she never forgot her primary reason for being there: her academic mission.

One early role model for Kioko was Wangari Maathai, who later won the 2004 Nobel Peace Prize for her contributions to sustainable development, democracy, and peace. Maathai once came to speak at Kioko’s high school. “Seeing her oozing with confidence the way she did, not just as an environmental activist but as a woman, was something really to behold,” says Kioko.

Studying biology, chemistry, and geography at high school, Kioko says she was “fascinated by the way something as small and inanimate as a seed would develop and grow into a fully-fledged plant”. She went on to study biology and zoology at Kenyatta University, where she stayed for her master’s and doctoral degrees. After joining the National Museums of Kenya after her first degree, she went to the University of Wales in the United Kingdom to undertake a postgraduate diploma in applied insect taxonomy.

Since completing her PhD in 1999, Kioko has spearheaded many significant research projects. She led the taxonomic identification and differentiation of two stem borer pests that were decimating maize and sorghum crops in Kenya. This work made it possible to control the pests through imported egg parasites rather than chemical pesticides. “It is very important to correctly identify the enemy before starting the fight!” she says.

Kioko also played an instrumental role in developing new technologies for smallholder farmers involved in sericulture—farming silkworms for silk production—and apiculture—keeping bees for their honey. Additionally, she pioneered research on the wild silk moth in Kenya, which opened new opportunities for sericulture.

Her contributions to the identification of butterflies and moths and their habitats in the coastal forests of Kenya helped establish butterfly farms in the region. These farms export butterflies and moth pupae to insect parks around the world. Initiated in 1993, the Kipepeo Project (Kipepeo means butterfly in Swahili) is a community-based enterprise that supports the livelihoods of people living in and around Arabuko Sokoke Forest Reserve on the Kenyan coast. “It began as a countermeasure against forest destruction, by offering an alternative source of income to the community,” says Kioko.

She believes growing up in a village has helped her connect with rural communities. Today, the Kipepeo Project generates 1.2 million Kenyan shillings (US$12,000) from tourism in addition to the 18-20 million KSh the project itself raises as revenue yearly. It employs 2,550 people directly (800 in butterfly farming and 1,750 in beekeeping), while sustaining another 40,000 locals indirectly through spin-offs such as curio selling and hospitality.

“This has enhanced the appreciation and conservation of the Arabuko Sokoke Forest, ensuring that our natural heritage lives on,” says Kioko, who sits on the project’s steering committee. Other communities at the Kenyan coast are following suit. For instance, the nearby Kaya Kauma community is putting up a butterfly farming enterprise of its own.

Looking to the future, Kioko is interested in how insects could help address food insecurity—for livestock, as feed, but also for humans. She is focusing on insects as food as well as pollinators. The award from the British Ecological Society has inspired her, she says “to keep going despite and in spite of extraordinary challenges that many times come my way” and also to motivate others, especially young scientists and smallholder farmers.

Inside this bug-focused naturalist beats the heart of a humanist, too. When asked what it is about insects she finds so captivating, her reply could apply equally to other Kenyans who grow up under difficult circumstances yet find pleasure in helping others: “Their ability to continue offering so much service to us and our environment despite the fact that we rarely recognise and take care of them.”