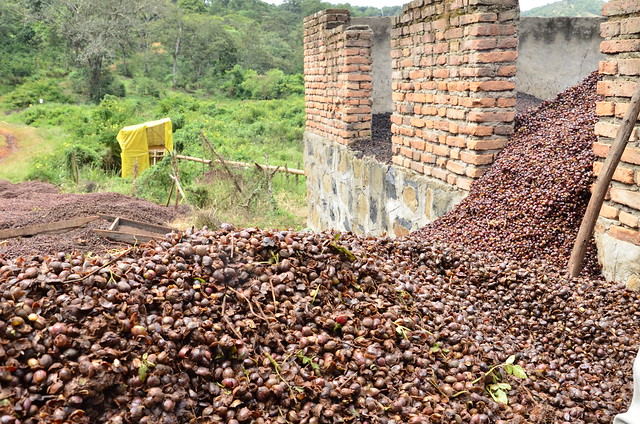 Waste from coffee processing could be used to clean polluting runoff from other industries, a group of Kenyan scientists has shown. But with the country’s coffee harvests dwindling, others wonder if it is worthwhile pursuing a technology based on a waning resource.

Coffee is Kenya’s fourth greatest generator of foreign income after tourism, tea, and horticulture. Waste coffee husks—produced when dried coffee fruits are milled to get at the bean inside—are usually discarded at milling sites, creating an unsightly and toxic mess given that it contains high levels of caffeine and tannins.

To explore a new use for the waste husks, a group of scientists from the universities of Nairobi and Kabianga set out to test whether they could be used to clean polluted industrial wastewater. They targeted crystal violet dyes, which are routinely used in the textiles, leather, plastics, and printing industries.

There are other ways to remove these dyes from wastewater but they are expensive, the scientists write in their paper, which was published in the September issue of Scientific African. They add that the dyes still end up in the environment where they can cause cancer in animals and humans. The dyes also pose a threat to aquatic ecosystems as they stop sunlight from penetrating into rivers and ponds.

The scientists crushed coffee husks into a fine powder which they washed and dried. They then tested its ability to extract dye from a solution. Using this method, they were able to remove 98% of the dyes from a solution. Thus, waste coffee husks are “suitable and sufficient” for removing crystal violet dye from wastewater, the scientists write. They add that the technique could be a “low-cost and eco-friendly” way to remove these dyes from wastewater.

However, Kenya’s dwindling coffee harvests could risk strangling the supply of waste coffee husks over the long term, says Moses Wang’ombe, an agricultural engineer at Egerton University in Njoro, Kenya. He says that while the team’s results are promising, the method might not be sustainable on a large scale.

Wang’ombe says industries looking to clean their wastewater are unlikely to adopt a technology with a supply problem. He adds that other materials have been suggested for dye removal, including sawdust, coconut husks, and peanut husks.

There are also competing uses for the coffee husks. Benjamin Muya, a coffee farmer in Nyeri in the central highlands of Kenya, says the husks collected from his seeds are turned into biofuel briquettes. “This has not only helped to sort out the menace of litter with the coffee husks that was there before but also created another source of fuel,” he says.

However, the University of Kabianga’s Wycliffe Wanyonyi, an author on the coffee husk paper, says profits from waste husks could provide a lifeline for ailing coffee farmers. “[Selling husks] will bring additional income to the farmers and in the long run, coffee farming will become profitable,” he says. “If this happens more, farmers will be happy to restart coffee farming, and there may be no shortage of husks.”