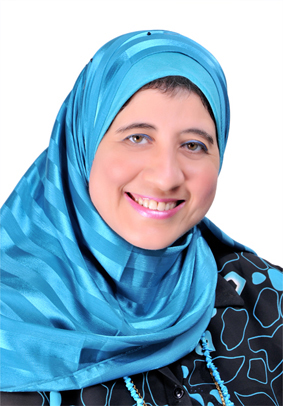 Amal Amin, a polymer scientist at Egypt’s National Research Center, explains how the 9/11 terror attacks inspired her lifelong drive to build unity and peace through science.

The world turned upside down the day after I returned to Egypt. I had just completed the lab work for my chemistry PhD in Germany, and on 10 September 2001 I travelled home with my small daughter, leaving my husband behind to continue his studies. Our luggage went missing in Munich, and I arrived late and tired at my parents house.

The following day, when I woke up I discovered terrorists had attacked the United States. Muslims were being blamed worldwide, and there was fear of war and recession, hatred, and revenge. Despite being back in the country of my birth, surrounded by family and friends, I felt unsafe and alone. Everything seemed illogical—everything except science, my only constant in a changing world.

In the middle of that ugly chaos, I knew I wanted to use science to make the world a more logical and peaceful place, where we accommodate each other, where we all live together, where nobody lives alone.

I got my chance when, in 2009, I met fellow dreamers at a conference for young scientists in China. Together, we founded the Global Young Academy—a forum for young researchers from different continents and cultures who share a passion for using research to solve global challenges. Afterward, I personally founded the GYA group for women in science to promote gender equality.

It may seem curious that a muslim woman from a traditional family founded such a group. But I have never been one to unquestioningly follow tradition. As a child, I was impressed by the story of Marie Curie, my first role model. She became one of the world’s foremost scientists, a winner of two Nobel prizes, despite suffering a lot during her life and having to face many challenges as a woman. Curie inspired me to study science, and chemistry in particular.

I decided to get my PhD outside my country, even though I knew that doing so pitted me against cultural stereotypes at home of what women were expected to do. My family encouraged me to be the best student I could be, but they did not want me to travel alone for long periods without starting a family. Luckily, I married a colleague who shared my dreams. Immediately after our first daughter was born I was accepted for a German PhD scholarship. My husband took care of our daughter while I learned German, and then joined me in Germany.

Germany was tricky. My culture, looks, and preferences set me apart from my peers. I was the only married person in my group, and the only one with a child. My husband and I woke up at 5 a.m. during the week and I often worked weekends. I wanted to finish my degree quickly, and I did—completing my practical work in 18 months instead of the usual three to four years. I wrote up my PhD back in Egypt. By then my personality had changed. I had become stronger; I would not let any hurdles stop me from accomplishing my dreams.

Back in Egypt I wanted to introduce some of the techniques I had learnt in Germany to my research at the National Research Center in Egypt. For my PhD, I used catalysis and controlled polymerisation—a technology that can be used to create nanostructures. I met with several obstacles. I realised that our problems in developing countries are not always due to a lack of funding, but sometimes because research predominantly faces away from innovation. There was no teamwork, and scientists were working as separate islands, pursuing promotions and furthering their scientific careers—not working to deliver impactful change to society.

Traveling widely, to more than 35 countries, I also found that no matter where I went, people viewed scientists as distant from their daily lives. So, in Egypt, I co-founded the Egyptian society for nanotechnology and the Egyptian Young Academy of Sciences. I traveled with other members of EYAS to rural areas to raise science awareness and boost the impact of science in society.

The world is changing fast, driven in part by technology. I think it’s time for all of us to slow down a little. Science must be more moral and human, otherwise it will be turned against us. And we as scientists must drive that change.

I believe science can be a great force for unity. From my work as a woman scientist and at the GYA, I saw that all the barriers that separate scientists—gender, religion, culture—are artificial. On the level of people, we are all similar. Science is a universal language. I want future generations to share a more progressive perspective. Also, I believe in the value of networking and science diplomacy to strengthen the impact of science worldwide

I recently founded ‘women in science without borders’, a movement that targets men and women alike. It aims to bridge the gender gap, but also to connect people with scientific knowledge and create a network to enable people to serve society more effectively. It encompasses all sectors of society including NGOs, industry, entrepreneurs, youth, and policymakers. The movement has reached more than 40 countries. Its first three meetings were held in different countries in Africa; the fourth one will be held in Brazil in March 2020.

During my life, I have had ups and downs. I’ve had failures as well as successes. I’ve worked hard without recognition; I have been called hard and unfeminine. However, I did not give up, and I hope my story will inspire others. We need role models who help us dare to hope that there will be light at the end of the tunnel of hard work. For me, the following words—by Marie Curie, who else?—have always offered comfort:

“Life is not easy for any of us, but what of that? We must have perseverance and above all confidence in ourselves. We must believe that we are gifted for something and that this thing must be attained.”

Amal Amin is an associate professor for nanotechnology specialising in polymers at the National Research Center in Cairo, Egypt. She has a special interest in science communication, increasing public awareness of science, science advice, innovation, and science policy.