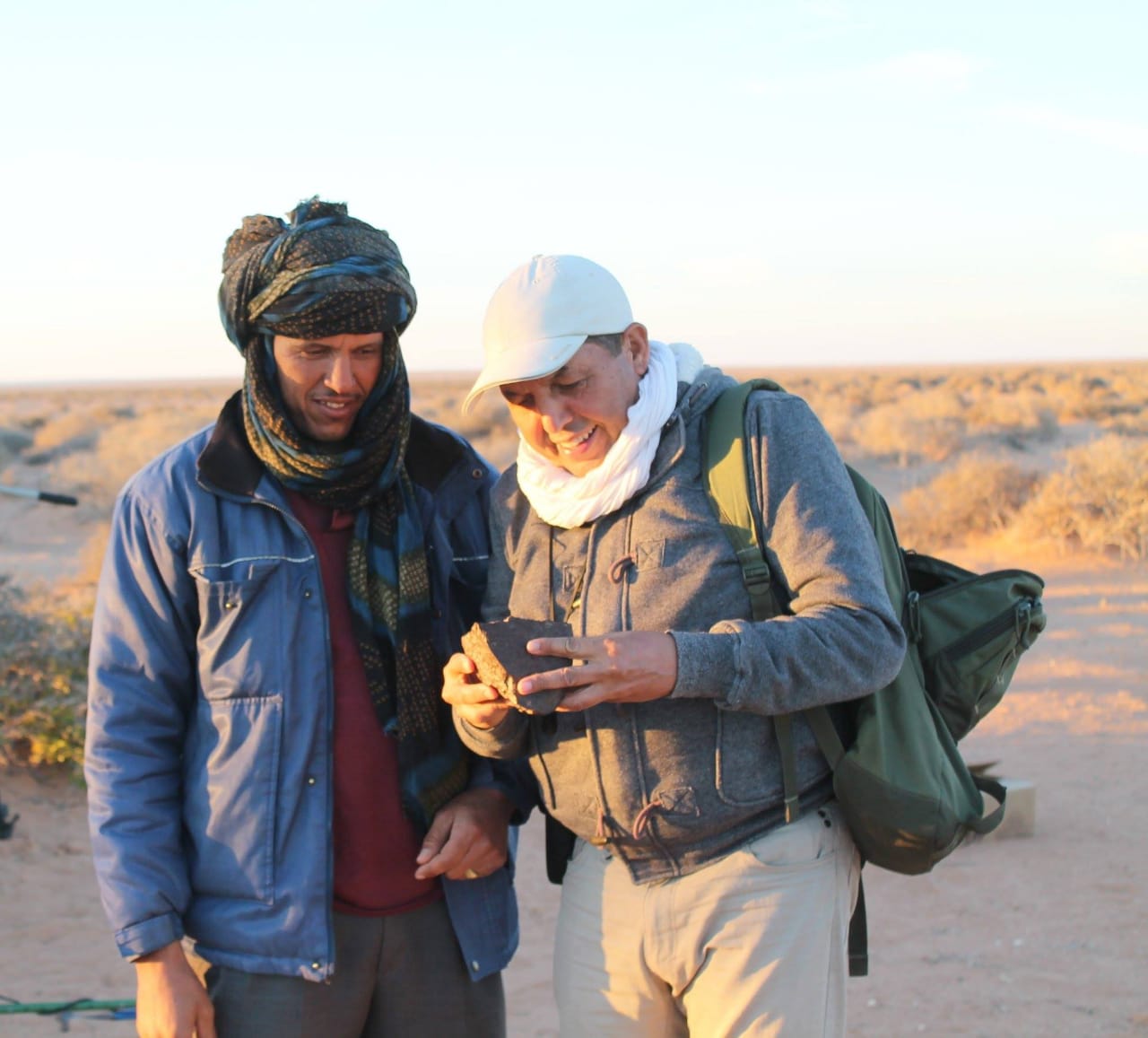 One-fifth of all the meteorites found on Earth have been discovered in Africa, and the number of locals studying them is growing.

In early June last year, Roger Gibson was watching the news when a meteorite sighting was reported not far from Johannesburg in South Africa where he lives. A security camera on a farm had filmed the fireball disappearing below the horizon. Gibson, a geologist at the University of the Witwatersrand, was part of the team that recovered the space rock, which had landed in the middle of a game reserve in Botswana.

This meteorite was special because a team of astronomers surveying the sky in Arizona in the United States had tracked it eight hours before it hit the Earth—a feat that had only been managed twice before. “With 99.9% of falls that are observed, there’s no warning,” says Gibson. “Suddenly there’s a bright light in the sky, something explodes and maybe the pieces are found.”

Gibson usually studies the craters left behind by such impacts, not the rocks themselves. But this time he was part of the rescue mission, braving rugged terrain, lions and elephants. “Imagine walking through the bush, with someone with a gun next to you just in case there’s a wild animal,” he says. “And you’re supposed to focus on the ground.”

The recent meteorite in Botswana is one of many noteworthy falls in Africa. The continent is the largest source of meteorites in the world, accounting for 20% of finds worldwide. They include three rocks from Mars, which are rare, and several lunar meteorites. One rock is thought to be from Mercury—the only one found on Earth so far.

Analysing meteorites can provide clues about the history of our solar system, so it is no surprise that scientists are interested in recovering them. However, while Africa might be an important source of space rocks, most of them are sent away to be analysed in developed countries. “Even the biggest research labs in Africa don’t have enough instruments to analyse meteorites, so we always need to collaborate with labs in America and Europe,” says Fouad Khiri, a geologist at Ibn Zohr University in Agadir, Morocco, who studies the rocks.

Khiri has been investigating why there are so many finds in Africa. The landscape is often key: it’s easier to spot meteorites in deserts, which cover a large part of Africa’s surface area. Their dark colour stands out against the light-coloured sand. They are also better preserved in dry conditions. Having an evenly spread-out population also helps, he adds. “We found that in countries with a uniform population distribution, there are lots of observed falls.”

Several rare meteorites have been recovered in Morocco, whose eastern Sahara region is one of the most prolific places for finds worldwide. The most famous is Tissint, a Martian meteorite that crashed out of the night sky in July 2011. Its fragments were recovered during the following months near a desert town of the same name. “It’s a very important meteorite because it’s the fifth from Mars that was seen falling to Earth,” says Abderrahmane Ibhi, another geologist at Ibn Zohr University who found a piece of it. “It contains information about the Red Planet.”

While Ibhi and other Moroccan researchers contributed to research on Tissint, foreign teams led the detailed analyses of its make-up. This arrangement makes sense to Khiri. He says that while his university recently acquired a scanning electron microscope that can reveal the chemicals and minerals inside a meteorite, they don’t have the full range of instruments found abroad. “We are missing instruments that would allow us to finalise our observations and confirm the origin of the meteorites we receive,” he says.

The information obtained from such close scrutiny can be groundbreaking. Studying Tissint, Philippe Gillet from the Swiss Federal Institute of Technology in Lausanne and his colleagues found traces of organic carbon—a key component of all known life on Earth—in the meteorite. They suspect that the carbon was deposited in the rock while it was still on Mars by a liquid rich in organic matter, which may suggest that there was once life on Mars.

Another Martian meteorite was found in the Moroccan desert in the same year as Tissint. It is noteworthy since it’s one of the oldest and contains more water than any other specimen. Nicknamed Black Beauty, it’s thought to be over two billion years old. There is evidence that it was weathered by water, suggesting that the surface of the planet may have been wetter during that time period than we had previously thought.

African meteorites are also giving insight into conditions on the moon. Masahiro Kayama from the University of Tokyo in Japan and his colleagues recently analysed a lunar specimen found in the Sahara desert in 2005. Kayama was surprised to find that it contained moganite, a mineral that requires a lot of water to form. It’s the first time moganite has been found in a space rock. “It was believed to be absent from extra-terrestrial materials because it only originates from recent abundant water activity under high pressure,” he says.

NASA’s Deep Impact spacecraft and India’s Chandrayaan-1 probe have detected water in the top few meters of the moon’s surface during flybys. However the moganite discovery suggests that water exists further below the surface, where the meteorite is likely to have formed. “It provides a possibility that water or ice survives in the subsurface until now,” says Kayama. This is of interest for future moon missions, which could use the water for drinking, extracting oxygen for breathing, or for hydrogen fuel, he says.

The origin of the meteorite that fell in Botswana still hasn’t been revealed. Like the Moroccan meteorites, it is currently being classified by an international team. However, in a first for Gibson, his lab is describing the composition of the minerals it contains. “We have some interesting results that we now need to cross check against the [meteorite] database to see whether we are going to add extra information about this particular subclass,” says Gibson.

He was joined on the expedition by local students. Together, they were able to do what none of them had done before—locate pieces of a meteorite. It took them a week to find the first fragment, and they recovered more pieces on subsequent expeditions. “It’s an example of bringing in the resources you have and being able to utilise that in the search,” he says.

There are few African experts in meteorites and related branches of planetary and space science. Gibson was brought on board because he was relatively close to the impact site and had relevant field experience. But there are initiatives to train more local experts. The African Initiative for Planetary and Space Science (AFIPS), for example, was founded about two years ago. As part of its activities, it provides training for African students and scientists.

Meanwhile, in Morocco, Khiri and his colleagues have been teaching locals about meteorites. Through presentations and site visits organised across the country, they have been showing people how to distinguish them from terrestrial rocks. Taking the GPS coordinates of a find is also important for its provenance to be recognised by the Meteoritical Society, an international organisation that approves all new meteorites. To date, this information is missing from most Moroccan meteorites, which were usually picked up by local people who did not know to note down the exact coordinates, or by meteor hunters set on selling the rocks for profit. As a result, these meteorites are classified more generally as coming from northwest Africa. “It negatively affects Morocco’s meteorite heritage,” says Khiri.

Khiri thinks the outreach efforts are having an impact. Locals frequently contact his team for advice when a fall happens in the region. And whereas many of the rocks brought to him used to be from Earth—not space—genuine finds are becoming more common.

For his part, Gibson continues to encourage his students to see the value in studying meteorites. New knowledge of the solar system isn’t just about capturing the imagination: it can have practical applications on Earth and on the continent. “There is no real difference between knowing how to interpret river systems and surface landforms on Mars and on Earth,” he says. “That knowledge can later be used to understand rivers in [a student’s] home country and help with agriculture and water resource management,” he says. On a continent made up of developing nations with immediate issues to tackle, meteorites may have a home after all.

Sandrine Ceurstemont is a freelance journalist based in Morocco.