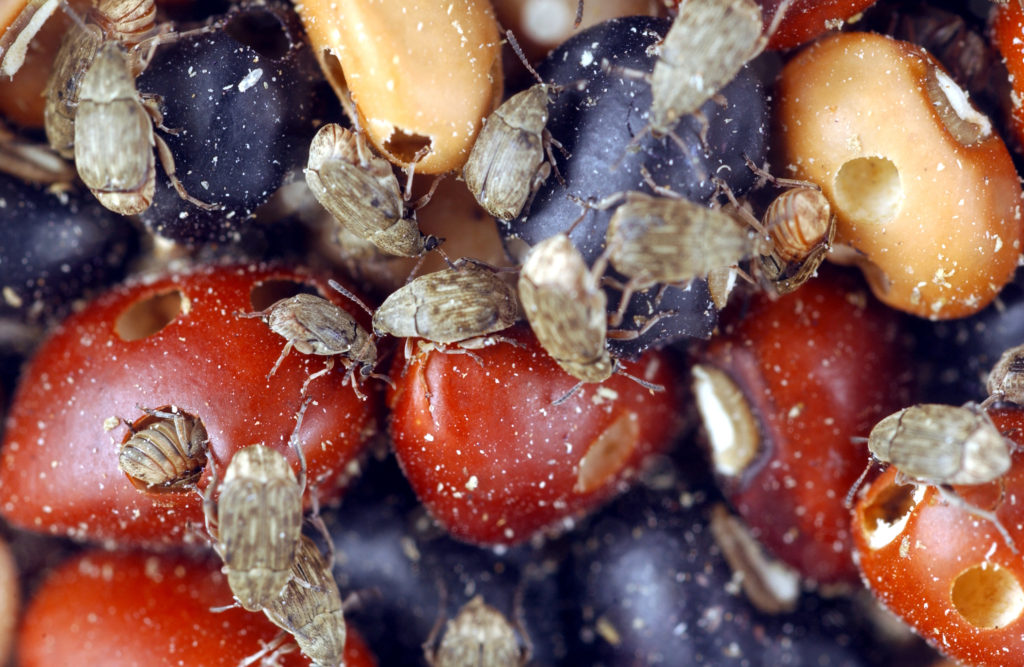 Weevils create a horrible sight. They cause mould to grow which produces poisonous substances that can make people sick.”

When I was a little girl, I could abandon a whole meal at the sight of an insect on my plate. My mother would do her best to make sure that our meals were kept away from ants but, somehow, she couldn’t manage to prevent dead cowpea weevils (Callosobruchus ) from appearing in our cooked cowpeas, which we call beans. The meal was our dinner four times a week and mum said the protein in the beans would make us grow tall and keep our skin shiny.

I liked the idea of growing tall and having healthy skin, but out for dead weevils in my food was discouraging. To help me overcome my reservations, my mum told me that the weevils were responsible for the beans’ protein benefits. But I later that my parents were as troubled as I was by the insects. They bought beans in smaller quantities from the market so we could finish them before the weevils began to proliferate, but that led to a reduction in the number of times we had beans for dinner.

Weevils create a horrible sight when they emerge from stored beans. The pests, which breathe and excrete in and amongst the cowpeas, cause to grow in a container of infested beans. Those , in turn, produce poisonous substances that can make people sick. The thought of consuming weevil waste and microbes along with a nutritious meal is not appealing.

But that’s not the only way weevils harm beans. The larvae bore into the beans to feed, piercing the seed coat and creating holes that tarnish the appearance of the beans and reduce their quality. Left to their own devices, weevils can reduce a bag of beans to powder, rendering them completely unfit for consumption. Even at this point, weevils are unrepentant. They leave the container to search for fresh beans on which they can lay more eggs.

When I saw that people planted lemongrass to repel reptiles, my first thought was if it could get rid of weevils too.”

The terror of weevils affects everyone: households, farmers, and traders. In developing countries where farmers and traders often lack formal education, they indiscriminately use insecticides to kill weevils or to prevent them from attacking their crops to eliminate losses. In my country, Nigeria, some traders use toxic substances which are not meant to be applied to food to get rid of weevils. Chemicals of this nature are bad for human health because they can cause damage to the respiratory, cardiovascular, and central nervous systems. They can also cause cancerous cells to develop in organs like the colon, prostate, thyroid, lungs, and liver.

As an adult and a trained scientist, I wanted to find alternative methods of dealing with weevils. I a pesticide that did not harm humans, animals, or the environment, and I looked to plants to find it. People have long used natural methods to combat pests.

So when I saw that some people planted lemongrass (Cymbopogon ) around their homes to repel reptiles, my first thought was if it could get rid of weevils too. It became a pet project, which I continued with during my at the University of Ibadan, Nigeria.

Weevils attack grains and pulses in storage, not just beans. Helped by my mentor Adegoke Adegbite, my team members and I got to work in the laboratory where we reared large numbers of weevils for the study. We then distilled a fluid from a decoction of lemongrass leaves and exposed adult weevils to it. The results were impressive: About 70% of the weevils died within two to three hours of exposure.

To kill more of the bugs more quickly, we obtained distillate from other insecticidal plant parts like orange peel to boost the effect. We combined the plant distillates in different proportions with lemongrass as the chief component and made a biopesticide, which killed 100% of adult weevils within an hour of application.

We also investigated our biopesticide’s ability to prevent weevil eggs from maturing. We let female weevils lay eggs on clean seeds, divided the seeds with visible weevil eggs into groups, treated them with different concentrations of the formulation, and then incubated them in the dark for eight weeks at room temperature. At the end of the incubation period, none of the treated seed groups had larvae or adult weevils, while the untreated control group showed 70% adult weevil emergence.

But while our product can kill weevils in infested grains, it works best as a preventative measure on newly harvested beans and maize since that requires less of the product. The formulation can preserve treated seeds and grains for up to a year and a half without reapplication. Synthetic pesticides, on the other hand, require reapplication after two to three months. Also, the product has a pleasant lemony smell that doesn’t affect the taste of beans when used in small quantities.

The product has been patented, and we are looking to license it to an interested organic pesticide company for . But the discovery has had benefits closer to home as well: When I told my mum that children who want to eat beans to get shiny skin and grow tall won’t have to worry about weevils or chemicals anymore she stared at me, grinning from ear to ear.

Mojisola Esther Karigidi is a Nigerian biochemist and entrepreneur, and the founder of Moepelorse , a start-up venture for the production, sale, and distribution of environmentally-friendly organic pesticides.

One thought on “Helping little girls grow tall, one dead weevil at a time”