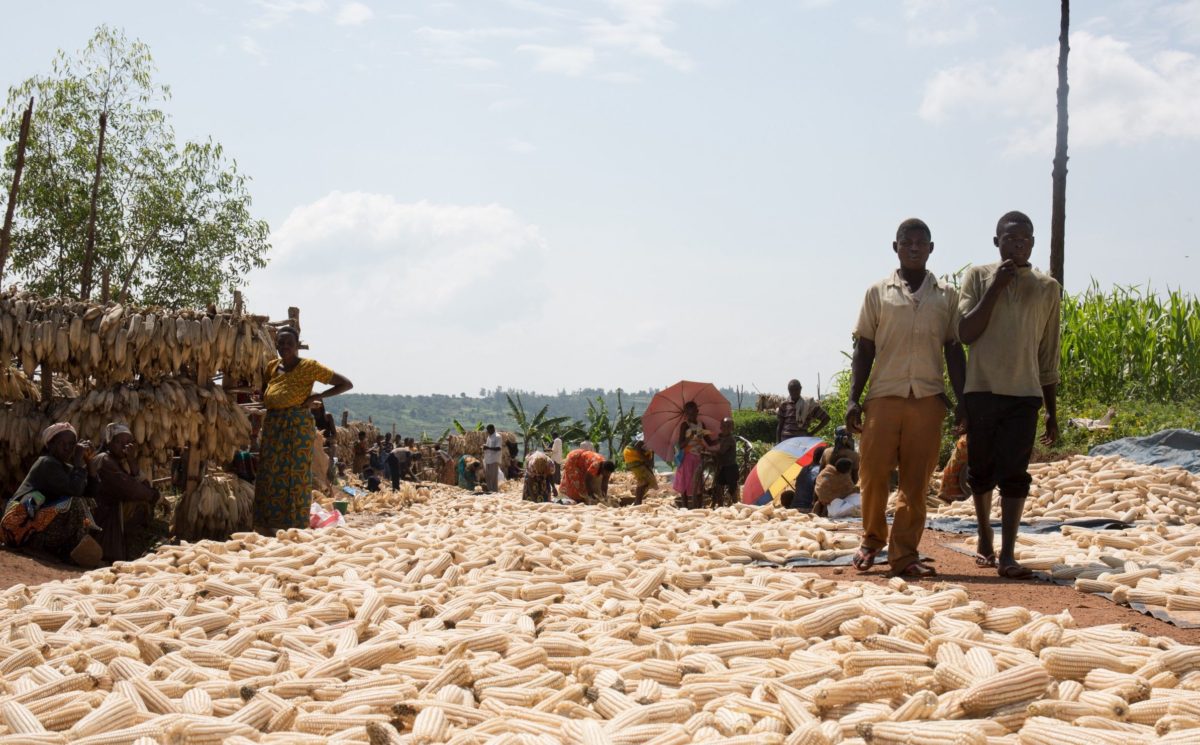 Many African countries are working to curb the threat posed to human and animal health by mycotoxins. But climate change could set back their progress, Sharon Kantengwa reports.

About 80% of East Africa’s population depend on farming for their livelihood. For them, an ever-present scourge is mycotoxins—harmful substances produced by mould growing on cereal crops like maize, peanuts, cassava, and millet. These toxins are bad for human and animal health. They have been associated with cancer and liver disease, suppress the immune system, and can stunt the growth of children. When consumed large quantities, they can kill both humans and livestock. Despite this, many farmers on the continent are not aware of their existence or possible consequences.

There are many initiatives to reduce mycotoxin contamination in African countries. But they face a new stumbling block: climate change. Models project that in the coming decades many hot and humid areas of the continent will get hotter and wetter as global temperatures rise due to human-linked greenhouse gas emissions.

“Climate change will make the problem of mycotoxins in Africa much worse,” says Amare Ayalew, programme manager for the Partnership for Aflatoxin Control in Africa (PACA), a continental initiative to coordinate the control of aflatoxin the most dangerous mycotoxin. Not only does increased humidity and warmth spur the growth of the toxin-producing moulds, but higher temperatures push the genes in the moulds that produce the toxins to express more frequently, says Ayalew who is based at the African Union headquarters in Addis Ababa, Ethiopia. Consequently, climate change could result in more mould, and also more toxins. This, he adds, represents a major threat to trade and food security on the continent.

Climate change will make the problem of mycotoxins in Africa much worse.

An age-old threat
Mycotoxins entered the human food chain at about the same time as we began to farm crops and store them something scientists estimate happened about 10,000 years ago. Stored grain provided a new ecological niche for fungi, and led to the proliferation of diseases like ergotism, which is caused by eating mouldy rye and which can trigger convulsions.

Sophisticated crop handling techniques have reduced the problem significantly in Western Europe and other developed regions. But across the developing world, mycotoxins remain a challenge. In 2015, the International Agency for Research on Cancer estimated that 500 million people across sub-Saharan Africa, Latin America, and Asia are exposed to dangerous levels of mycotoxins.

Many African countries have recently stepped up their fight against the scourge. Last year, Rwanda’s Food and Drugs Authority (FDA) developed regulations governing food fortification, food-product labeling, registration, and hygiene. But some processors are violating the safety requirements by using substandard raw materials, says Charles Karangwa, acting director-general of Rwanda FDA. According to Minimex, a Rwandan maize producer, the level of aflatoxin in some of the local maize was more than five times higher than safe levels.

Intergovernmental organisation East African Community (EAC) last year also strengthened its plans to combat aflatoxin and agreed on a policy framework to deal more effectively with the threat it poses to human and animal health.

But some countries, like Uganda, don’t have fully developed strategies for controlling mycotoxins. Such strategies are sorely needed, writes Fred Lukwago, a food scientist at the country’s Makerere University in a 12-year review of Uganda’s mycotoxin trends. The review, which was published in March 2019 in Scientific African, says that aflatoxin contamination costs the country almost US$600 million per year as a result of liver cancer cases—just one of the many health effects the toxins have in humans.

Lukwago and his co-authors, all from Makerere University, note that parts of Uganda will become hotter and more humid as a result of climate change. This will spur the proliferation of mycotoxins, they write, “yet there are no measures in place to mitigate the potential effects”.

And some of the changes could be imminent. Rwanda is already experiencing increased extreme rainfall, and in Uganda climate change-related disasters like floods and landslides are occurring more frequently.

Possible solutions
However, Rwandan organisations and farmers are trialling solutions. A simple one involves improved methods of drying out crops. The Rwanda Agricultural Board is training farmers on the proper handling of maize, as well as organising an awareness campaign on aflatoxin, says Gilbert Rwaganje, a post-harvest handling specialist on the board. He says that the country has also mobilised the private sector to buy and introduce technologies that could assist, such as mobile dryers. “Currently, more than nine mobile dryers by private individuals are offering the services to different farmers.”

Moses Ndayisenga, quality assurance officer at Minimex, says that they are also introducing new ways of drying maize. The traditional way of drying maize, by spreading the produce out on corrugated iron sheets and leaving them in the sun, is not sustainable, especially as rain patterns are becoming unpredictable. At the moment, more than 3,000 temporary drying facilities are being constructed in collaboration with farmer cooperatives and local government, Ndayisenga says.

But in the absence of advanced mechanical dryers like the ones used in developed countries, Rwanda and many other African countries will continue to suffer aflatoxin attacks, says Kirimi Sindi, a food scientist in Kigali. “In the developed world they have mechanical dryers […] to dry to the required moisture level. In Rwanda and in many African countries, we don’t have these because the cost of energy is high.”

There’s another solution that’s also being investigated: Aflasafe. Aflasafe, developed by the International Institute of Tropical Agriculture (IITA) in Nigeria with funding from development funders in United States, Germany, and Austria, is a harmless type of Aspergillus flavus, the same fungus that produce aflatoxin. When sprayed onto grains, Alfasafe prevents its more dangerous cousin from taking root, and reduces aflatoxins levels in maize and groundnuts by 80% to 100%.

In Rwanda, the Alliance for a Green Revolution in Africa last year gave a grant to the IITA and the Rwanda Agricultural Board to set up a factory to produce Aflasafe in Rwanda, in partnership with the country’s agriculture and animal resources ministry. The three-year grant, which began in January, is expected to lead to local trials of the product before the middle of next year.

Partnership for Aflatoxin Control in Africa’s Ayelew believes that farmers will remain at the frontline of aflatoxin control and that they need to be better informed.

As countries like Uganda and Rwanda fight the toxins, their experiences could—perhaps surprisingly—turn out to be useful for developed countries that thought they’d solved the problem long ago. In 2017 a pair of scientists from Australia and Canada warned that with climate change some fungal toxins that “might have been rare in their working careers can reappear”.

In other words, mycotoxins could once more become everybody’s problem—and this time perhaps Africa could lead the fight.

Sharon Kantengwa is a reporter for The New Times newspaper and is based in Rwanda.