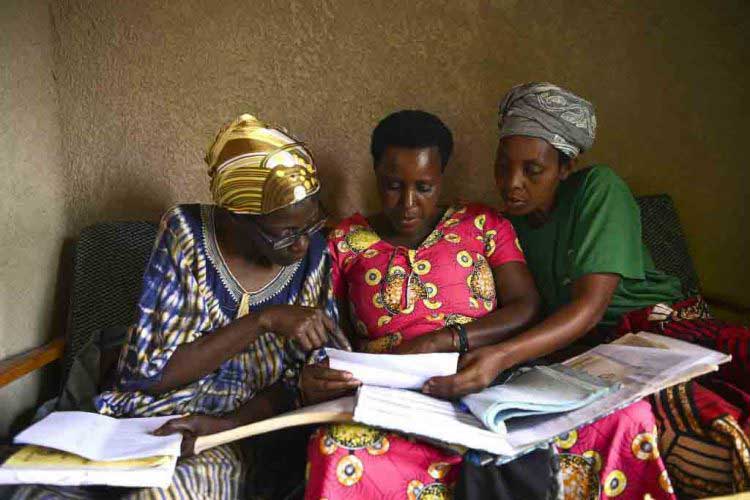 Rwanda’s female community health workers have been beating back malaria—can they do the same for Covid-19?

It’s a quiet morning just after sunrise in southern Rwanda, when a knock brings Uwinogoye Lucie to her door. Her neighbor Mukundente Magnifique stands on the doorstep, young son in tow. Two-year-old Serge is feverish and clammy; Magnifique suspects malaria. Lucie opens the door wide, an invitation to enter her home, and pulls a Rapid Diagnostic Test from underneath her table. She dons surgical gloves, pricks the tip of Serge’s finger, and in less than two minutes reads the results of the test: negative. Magnifique breathes a sigh of relief.

After years of persistent decline in malaria cases—an impressive 86 percent reduction between 2006 and 2011—Rwanda’s burden increased dramatically from about 225,000 cases in 2011 to 3.5 million in 2015. To tackle the onslaught, which was the same across East Africa, Rwanda decided to expand its home-based care of malaria from under-fives only to older children and adults too in 2016. This shifted overall malaria diagnostic and treatment care to the community level, which in turn prevented the country’s healthcare facilities from being overrun.

It’s a sustained shift. The number of Rwandans seeking community-based care for various illnesses more than tripled between 2015 and 2016, according to the country’s Ministry of Health. Today, 83 percent of infectious disease cases in Rwanda are treated at home, thanks to home-based malaria care and community-based distribution of drugs managing infections such as HIV/AIDS and tuberculosis. And at the frontline of this effort are Rwanda’s community health workers—most of whom are women, like Lucie.

“I call them the heroes of healthcare in Rwanda,” says Dr. Sabin Nsanzimana, director-general of the Rwanda Biomedical Center based in Kigali. “Just ten years ago, less than 20 percent of malaria cases were managed within the community. Now it’s almost 60 percent,” he says. For patients, home-based care means they don’t have to walk far while ill, or queue at overcrowded clinics, he says—and that will save lives. “Imagine a time [when] one hundred percent of malaria cases are managed in the community,” he says. “No one will die.”

Rwanda’s Community Health Program traces its roots back to 1995, when the country’s Ministry of Health sought to address the nation’s severe shortage of healthcare providers. The move followed the 1994 genocide, during which more than one million ethnic Tutsis and others were killed. At the time, life expectancy at birth in Rwanda averaged 31.9 years and infant mortality measured 117 per 1,000 live births, according to the World Bank. However, centralised training for community health workers and state provision of medical materials to them didn’t begin until 2005.

The CHW role is unpaid, but carries great respect in the community. And what began as a group of 12,000 volunteers in 1995 is now considered the cornerstone of Rwanda’s health system. More than 60,000 community health workers operate countrywide to deliver basic health services, conduct antenatal check-ups, diagnose and treat malaria, diarrhoea, and pneumonia, and refer complex cases to health posts, clinics, and hospitals. Each village has four community health workers, who are elected by their neighbors and trained by the Ministry of Health with a final examination solidifying their position. The foursome traditionally includes one male and one female CHW delivering basic care, one female antenatal care specialist caring for pregnant women, and a recently-installed fourth worker delivering the same basic health services as the first two.

Two-thirds of Rwanda’s community health workers are women. But there’s one sector in the country where the ratio is much higher: Busasamana sector, where a startling 84 percent of CHWs are women. The reason is that most men in the sector are drawn to work in the nearby Nyanza town, limiting their ability to honour the commitments of the community health workers role says Mukandahiro Claudine, the Community Health Environmental Officer of Busasamana sector. “Since the beginning, most of the male CHWs have been resigning from their responsibilities because they see it takes time,” she says. “Community health workers have to be in the community, sometimes spending the whole day there taking care of the families in the neighborhood. Men are busy and don’t accept that responsibility.”

Uwinogoye Lucie is one of the community health workers reporting to Claudine with monthly health updates from her community. A post-holder for the last 12 years, Lucie replaced a male health worker in her village after he failed the initial entry exam following his community nomination. “People had seen me helping them already,” said Lucie, who was treating people for fever and headaches long before her election. “When he failed, all chose me and gave me the trust to be their community health worker.”

Healthcare is a family affair for Lucie. Her mother was among Rwanda’s first community health workers, elected in 1997. “The way I saw my mother receiving the community, I was inspired to also take care of my neighborhood,” Lucie says.

Lucie’s mother, Mukagasana Josephine, is at 66-years-old still continuing her work in nearby Kidaturwa village. When she was elected, the country was only three years removed from the devastation of the genocide. She remembers the early days, and the overwhelming health problems facing her community. “In the beginning people didn’t trust the CHWs because they didn’t know if they had the skills to treat the patients in the village,” she sasy. “Now I can say that we are very respected, because even the government knows our tasks and our responsibilities in the communities.”

Josephine says it’s only natural that most community health workers are women. “We have been created to take care for others,” she says. “That’s why even when it’s time for the election, most of the people are selecting women instead of electing a man.” Women in post-genocide Rwanda made up anywhere from 60% to 70% of the population, becoming leaders in every sector out of necessity. “The country needed to be rebuilt after this destruction of human beings, infrastructure, and the social fabric,” says Rwanda’s Minister of Gender and Family Protection, Soline Nyirahabimana. “[Women] were obliged to be the ones to take charge of the situation.”

Community health workers were allowed to move between homes even under Rwanda’s lockdown, as they are considered essential workers. Still, the new disease has changed some of the ways in which Lucie interacts with the people under her care. She’s used to meeting people with fever—a common symptom of malaria. But now someone with fever could also have Covid-19. A rapid diagnostic test for malaria can rule that out—but health workers must take care not to expose themselves to the new virus. “Now, when someone comes to us for help, we keep distance with them,” says Lucie.