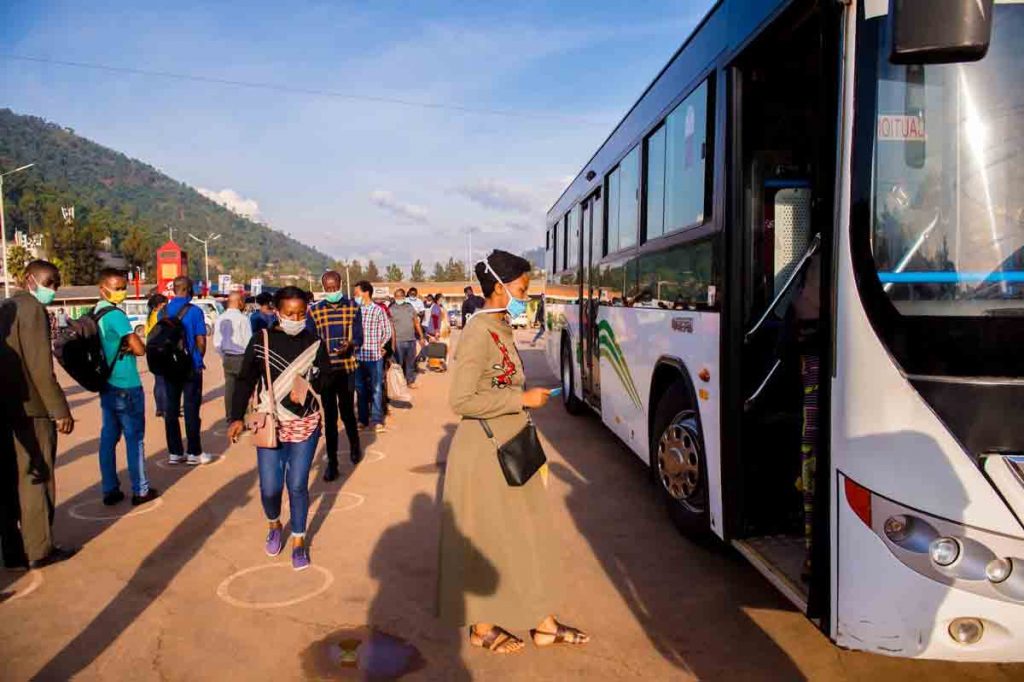 People line up for the bus in Kigali, Rwanda.

Kigali’s markets are the heart of Rwanda’s capital; shoppers throng between stalls, and tables are piled high with everything from carrots to jewelry. People from all over the city and country mill through these markets, and officials fear that they are where the novel coronavirus may take root and spread to the rest of Rwanda.

The east African country reacted quickly to the pandemic, instituting rapid contact tracing and putting a physical lockdown in place a week after its first case was confirmed. As of 4 June, Rwanda had fewer than 410 confirmed cases.

The country’s testing regime is now turning to potential hotspots, such as markets. But while Rwanda has enough tests at the moment, African countries are struggling to procure the tests and chemicals – manufactured mainly in China, India, and Europe – that will allow them to gauge the extent of the coronavirus spread within their borders. Rwanda, which still has its border closed, is investigating ways to scale up its testing significantly as it looks to open up its economy. And instead of testing every citizen for which it would require millions of tests, it has turned to a different strategy: pooled testing.

“There is a way you can test the population by pooling samples,” says Dr Leon Mutesa, a medical geneticist at the University of Rwanda in Kigali.

Pooled testing is not new, but it is gaining renewed interest as countries look to undertake widespread testing for the novel coronavirus. In 1943, American economist Robert Dorfman developed a technique to test US army drafts for syphilis. At the time, syphilis testing was very expensive, and Dorfman suggested pooling samples to identify whether the bacterium was present in a group of men rather than testing them individually. Scientists and health officials have since used this technique to test for influenza, chlamydia, and malaria.

And now they are looking to use it to track down people infected with the SARS-CoV-2 virus, as well as identify possibly asymptomatic people within communities. “We’ve been pooling in the national markets, an area where you find a lot of people,” says Mutesa. In a recently uploaded pre-print paper, researchers – from the University of Rwanda, the country’s joint COVID-19 taskforce, the African Institute for Mathematical Sciences, and the Perimeter Institute for Theoretical Physics in Canada – have laid out a method to optimise how many people to test.

The researchers, including Mutesa, took 19, 49 and 99 samples which were known to be from people who were not infected with the SARS-CoV-2 virus, and to each of those “pools” they added a sample which was positive for the virus. “We could see that the positive case was still detected in the three pools,” Mutesa says.

But the team also wanted to check their method in a real-world setting. They took 1,280 samples from the community and pooled them into groups of 20 and 50 – which were shown to be the best-performing group sizes.

“In those [community] poolings, we only found one positive in a pool of 20, and that allowed us to quickly give the result to people in other pools who were negative, and focus on the positive pool of 20,” he explains. In that group, each individual was tested so that they could identify who was infected with the virus. Instead of the 1,280 tests that would have been required to test every person, health officials only used 64 tests.

The team’s paper introduces a new mathematical algorithm to optimise the pooling of samples. The group of people to be tested is represented by a set of points arranged in a hypercube with three points on each side. For example, nine people would be represented as a three by three square. The square can be sliced into three slices in either vertically or horizontally, giving six different slices of 3 points each. The idea, then, is to test every slice. If there is a single infected individual among the nine people, then the positive slices tell you the position of that person in the hypercube. This method becomes much more efficient for larger groups, and in higher dimensions. To test 27 people, you use a hypercube in three dimensions. To find a single infected individual among 27 people, you need only nine tests. To find one person in 81, you use a hypercube in four dimensions and need only 12 tests.

This approach to pooled testing was the brain-child of Wilfred Ndifon, a mathematical epidemiologist and director of research at the African Institute for Mathematical Sciences Global Network.

“Rwanda has a very proactive stance with respect to COVID-19,” says Neil Turok, director emeritus of the Perimeter Institute of Theoretical Physics and a co-author on the paper.  “They’re a very pro-science as a country, so the minister of health pulled Wilfred [Ndifon] in… He collaborated with Leon Mutesa, an experimentalist in Rwanda. It’s always very exciting when mathematics starts to be combined with experiments, especially in public health. That’s an amazing application of mathematics.”

“[Pooled testing] is a very efficient way of testing if the [virus] prevalence is not high,” says Olivier Gossner, a professor of mathematics and economics at the French National Center for Scientific Research’s Ecole Polytechnique in France and the London School of Economics in the United Kingdom. “With one test, you can clear a group of people instead of just one person.”

This method of testing hinges on there being a low number of people infected in a given population. Once the number of infections within a community has begun to spike, this method becomes less useful because health officials are more likely to identify infections in numerous pools, and they will have to test individuals in any event.

In African countries, however, confirmed Covid-19 cases remain low in comparison to other parts of the world. The continent currently has under 200,000 confirmed cases, although some experts worry that this is due to a lack of widespread testing.

However, the continent’s low numbers offer countries an opportunity to use pooled testing in order to rein in the spread of the virus. In countries in Europe or cities in the United States that are being ravaged by the virus, this method would not be efficient. But in African cities, it could be particularly important considering the resource constraints that are hampering both testing efforts and countries’ medical responses.

A major impediment to curbing the spread of the virus is that many people who contract it are asymptomatic – sometimes they never even develop Covid-19, the life-threatening disease caused by the virus.

And that is where pooled testing can play a vital role. “We want this information [about who is infected and carrying the virus] as soon as possible,” says Gossner. “We need to take them out of the general population as soon as possible.”

Most testing efforts have focused on people who are showing Covid-19 symptoms, he says, but by then it is already too late. “We need to test [people] other than symptomatic people, and test the contacts of people. For that, we need to scale up testing and group testing is a net that is slightly larger.”

Mutesa says that follow-up testing is a must. “The [virus’s] incubation period is seven to 14 days”, he says, and people who tested negative at the beginning of that period may have in fact been positive. “It is better to test twice in a hotspot area. Then you can monitor [them] with your national surveillance system.”

As well as markets, this approach will be particularly important for schools, Mutesa says. It will allow the country to keep a close-eye on transmission in these hotspots once it reopens.

These are the issues that are plaguing countries around the world – whether they have yet to see the pandemic’s peak, or if they are European countries fearing a second wave of infections.

“There is a way that this can be useful for other African countries, but it is up to the leadership,” says Mutesa. “Because we are supported by our leaders [in Rwanda], the minister of health was the one to support this idea and to apply this approach.”