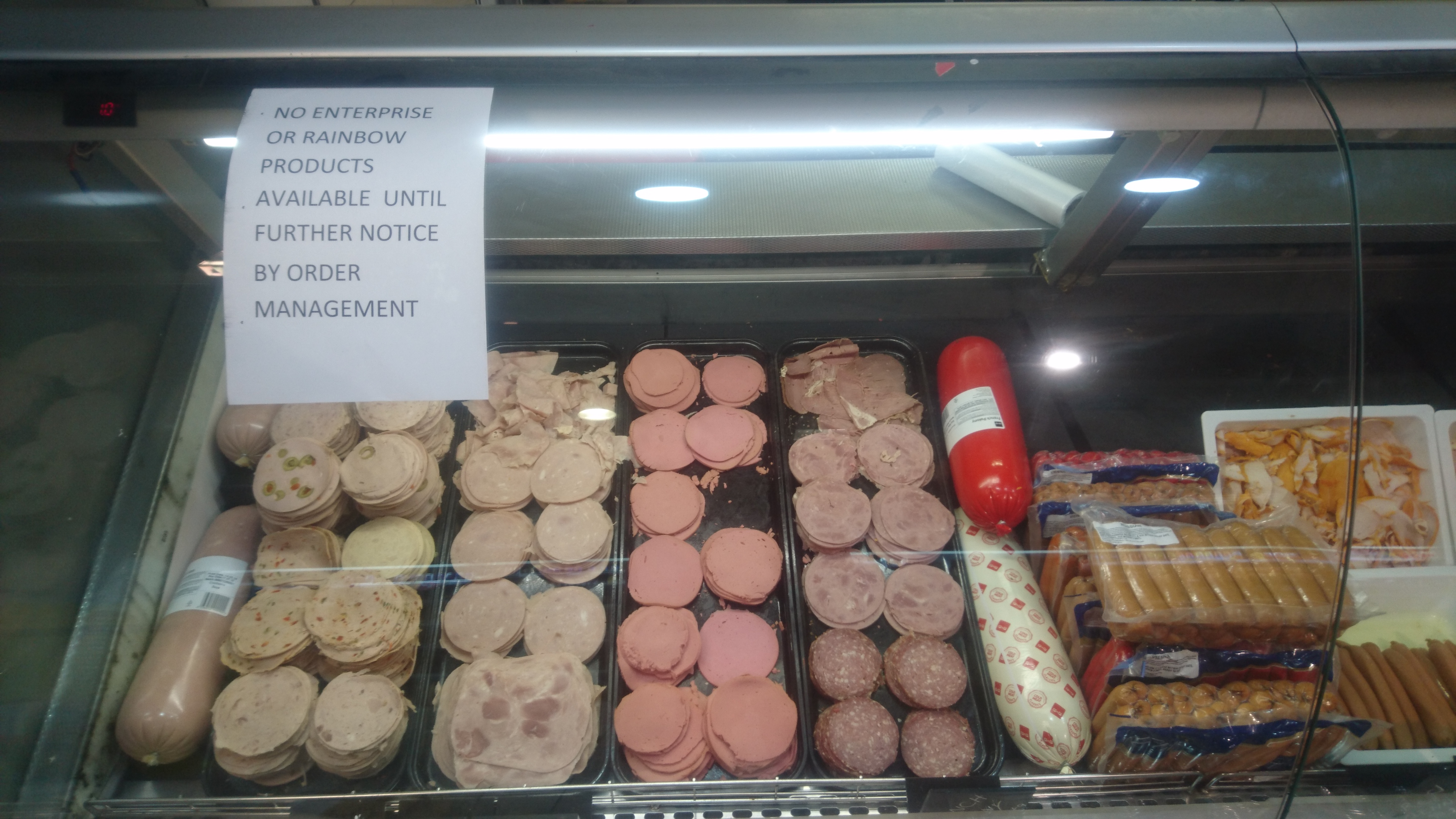 A deadly Listeria outbreak in South Africa highlighted the power that consumers wield in improving food safety. Now scientists hope to harness that power in other parts of Africa.

In mid-June 2017 at a medical lab in Pretoria, South Africa, five patient samples tested positive for the deadly foodborne bacteria Listeria monocytogenes. That was unusual: typically the lab got one positive hit per month.

Isolated microbial colonies of the pathogen, cultured from each patient, soon ended up at the National Institute for Communicable Diseases in Johannesburg—South Africa’s equivalent of the United States Centers for Disease Control. Microbiologist Anthony Smith analysed each isolate’s DNA: all were Listeria sequence type 6 (ST6), one of the most virulent strains.

Smith wasn’t worried—yet. He’d asked the Pretoria lab to send the isolates because he was creating a Listeria genotype database, the first-ever attempt in South Africa to track the deadly germ using modern methods. But the effort was still in its infancy. “There wasn’t any patient follow up,” says Smith. “No one was saying, ‘Oh, suddenly we’ve seen a few more numbers than usual. Let’s follow up, it could be an outbreak.’”

That would happen—after Smith’s lab had been inundated with ST6 strain isolates. By November, he was working seven days a week; by the following June, 216 people were dead, and more than 1,000 had sickened. It was the worst recorded Listeria outbreak in the world.

Nevertheless, US attorney Bill Marler, whose litigation in the 1990s revolutionized food safety laws in his own country, believes it was a turning point for food safety in South Africa. Why? Because the government noticed and tracked it and, just as important, because public outcry has been strong and now a class action lawsuit is pending.

Smith’s lab traced the Listeria outbreak to a type of processed meat called polony that was manufactured at a plant in Polokwane, South Africa. Victims and their family members are now suing the plant’s owner Tiger Brands Limited. Similar public anger and a lawsuit—filed by Marler—led to a sweeping overhaul of food safety policy in the United States after a 1993 Escherichia coli outbreak that killed four children was traced to undercooked beef served at Jack in the Box restaurants.

“There’s never been a large food borne illness type of litigation in South Africa, let alone a class action on behalf of 1,000 people and 200 who died,” says Marler, who is volunteering as a consultant to the attorneys who are representing the victims and also funding some of the legal research. “I got involved in this area of the law back in 1993 with the Jack in the Box case and I’m struck how people in South Africa [today] sound just like people in the U.S. did then: ‘How could this have happened? We never thought Listeria could be in this product.’ It’s a weird deja vu moment for me.”

‘The whole city becomes a restaurant’

Now, food safety researchers like Delia Grace of the International Livestock Research Institute, part of a global food security partnership, are attempting to take elements of that formula—public outcry equals better food safety—and apply it to low-income African nations. “Public demand, getting the public to understand how to recognise safe food practices and then having them put pressure on the sellers to provide that, is something we feel has good potential because of how it has worked in more developed countries,” says Grace, who is both an epidemiologist and veterinarian, and has worked to increase food safety in numerous developing nations.

Foodborne illness takes a massive toll in the developing world. A 2015 World Health Organization report—the first of its kind—estimated that the burden is on par with HIV/Aids, malaria and tuberculosis. Such sickness is often diarrheal in nature and results in poor nutrient intake. In children, this may cause stunting, which then affects their physical and mental development.

With this in mind, in November 2018 Grace and other ILRI investigators launched a US$3.5 million project in Burkina Faso and Ethiopia. It will provide better training for food sellers and regulators but, most importantly, will try to leverage consumer demand for safer food. “There needs to be some kind of incentive, a direct and relatively powerful motivator, for [food sellers] to change their behavior,” says Grace, who leads the project.

How exactly they will create consumer demand in those two countries is still unknown. In both places—as in much of Africa—there are numerous informal markets and restaurants that pop up on the street and that are poorly or rarely regulated by the government. In the early evenings in Ouagadougou, the capital of Burkina Faso, for example, “the whole city becomes a restaurant”, says Michel Dione, an epidemiologist and veterinarian with ILRI. “Someone puts a table on the street, puts a fire somewhere nearby and they cook some chicken and they have a crate of beer and people sit around and start eating, and then next to that someone else opens up something similar and so on.”

As part of Grace’s project, Dione is collecting qualitative data from food producers, sellers and consumers in Burkina Faso, while his colleague Kebede Amenu, a professor of food safety and veterinary epidemiology at Addis Ababa University, is doing the same in Ethiopia. Their aim is to determine what the riskiest practices are in the food chain and at what point they occur. “We divide the consumers into three groups—high, medium and low income—and question them about their animal and vegetable sources for food,” says Amenu, “where they get it, how aware are they of the traceability of their food, how they’re preparing it, do they recognise any safety issues and, if so, how they make demands for improvement.“

Before coming to Burkina Faso, Dione performed similar research in Uganda, interviewing both pig farmers and consumers. That work, detailed in a recent article in the journal Global Food Security, found that many consumers understand the importance of cooking pork thoroughly to avoid getting sick. Nevertheless, the respondents often put raw vegetables—onions, tomatoes, avocados—on top of their cooked pork and this was where their risk of contamination from foodborne bacteria went up.

“If you cook both of them very well, the meat and vegetables, there might not be any big risk when consuming them,” says Dione. “But if you cook the meat well and then you throw some raw onions on top that you just cut with your dirty hands or on a dirty tabletop, then risk is happening.”

That study also revealed that consumers used sensory cues to determine if the meat they were buying was safe. They looked, for instance, to see if there were flies on the meat, if the butcher’s clothes were clean and how the meat smelled. Other studies have shown consumers in other African nations using similar strategies. Food safety researchers recently interviewed teenage girls and women of reproductive age in two cities in Ghana: Accra and Ho. Their research is not yet published but they found that these consumers watched food sellers carefully looking to see if they covered up food to prevent flies landing on it and whether they washed their utensils. They also avoided places with piles of garbage nearby or gutters flowing with dirty water. “She covers her food with clean materials to prevent flies,” said one participant, an adult female from Accra. “Also, when she is not selling, she tries to always clean the surroundings and the utensils. Because of that I always like to buy food at her shop so I don’t get stomach problems.”

But while many consumers are aware that food can make them sick and some look for cleaner places to buy or eat in urban markets, Grace says, they do not have the tools to determine whether food that looks safe actually is. Here, she hopes her project will come up with some strategies to empower them. She envisions something akin to a pregnancy test strip that would change color if it detects fecal bacteria in unpasteurized milk for sale at a bustling urban market, for instance.

“We think if something like that was readily available and cheap, it would help consumers put a lot of pressure on retailers to improve safety, and then retailers would put pressure on suppliers. It’s called pushing governance down the supply chain and in the end the customer is king.”

Grace and her colleagues are also considering whether a location-based social media platform such as “Yelp”—which consumers in the United States use to rate businesses, including restaurants—would work as a tool to allow consumers in these two countries to inform one another about unsafe food sellers.

However, poverty could prove a stumbling block for the roll-out of such food-safety interventions. Dione says that he can remember as a child growing up in a village in Senegal that in the markets there were different piles of tomatoes: fresh, unblemished ones for those who had money and rotten ones for those who were poor. “If you don’t eat enough, how can you make a demand for something that is safe?” he asks.

Indeed, in South Africa the recent Listeria outbreak was traced to polony, a cheap processed meat that is mostly consumed by poor people. Nevertheless, despite it being a staple of their diets, many low-income residents stopped eating it once they heard government officials’ suspicions that the outbreak might be traced to processed meat—suspicions the government shared with the media long before they’d pinpointed the culprit. “Because of the media attention and social media, everyone knew what was going on,” says Smith. “And a lot of people were saying, ‘Processed meats, I’m not going to eat that anymore’.”

He adds that the South African government has now instituted a policy change: public health officials must follow up on every single Listeria case in the country; the moment a diagnostic lab finds an isolate, they are required to notify Smith’s institution. The isolate’s characteristics then go into Smith’s database, while an epidemiologist reaches out to the patients to try and determine what they ate that might have caused them to consume the bacterium. “Nothing is passive anymore,” Smith says.

That kind of public awareness-driven change is something Grace and her team hope they can find a way to productively harness in Burkina Faso and Ethiopia. “Consumer demand is what made food safe in England and America and everywhere else,” she says. “And our theory is it could also work in poor countries.”

Nancy Averett covers science and environmental issues from Cincinnati, Ohio, in the United States. Her work has appeared in Discover, Audubon, Sierra and many other outlets.